He was a leading figure in the period known as the Infamous Decade characterised by electoral fraud, corruption and rule by conservative landowners heading the alliance known as the Concordancia.Castillo graduated in law from the University of Buenos Aires (UBA) and began a judicial career.

He reached the Appeals Chamber of commercial law before retiring and dedicating himself to teaching.He was professor and dean at UBA between 1923 and 1928.Castillo was named Federal Intervenor of Tucumán Province in 1930.

From 1932 until 1935 he was elected to the Argentine Senate for Catamarca Province for the National Democratic Party and was also Minister of Interior.From 1938 to 1942, Castillo was vice-president of Argentina under President Roberto Ortiz, who won the election by fraud at the head of the Concordancia.

He served as acting president from July 3, 1940 to June 27, 1942 due to the illness of President Ortiz, who did not resign until less than a month before his death.

Castillo maintained Argentina's neutrality during World War II.He was overthrown in the Revolution of '43 military coup in the midst of an unpopular attempt to impose Robustiano Patrón Costas as his successor.

Juan Domingo Perón was a junior officer in the coup. 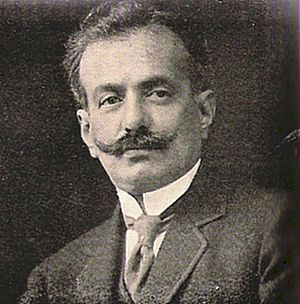 Argentine politician
Back
This content was extracted from Wikipedia and is licensed under the Creative Commons Attribution-ShareAlike 3.0 Unported License