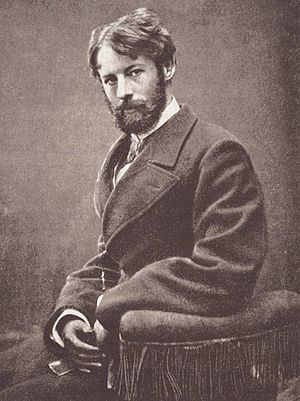 Wilhelm Iwan Friederich August Freiherr von Gloeden (September 16, 1856 – February 16, 1931) was a German photographer who worked mainly in Italy.He is mostly known for his pastoral nude studies of Sicilian boys, which usually featured props such as wreaths or amphoras, suggesting a setting in the Greece or Italy of antiquity.

From a modern standpoint, his work is commendable due to his controlled use of lighting as well as the often elegant poses of his models.

His innovations include the use of photographic filters and special body makeup (a mixture of milk, olive oil, and glycerin) to disguise skin blemishes.

His work, both landscapes and nudes, drew wealthy tourists to Sicily, particularly gay men uncomfortable in northern Europe, and changed the history of Taormina.

German photographer
Back
This content was extracted from Wikipedia and is licensed under the Creative Commons Attribution-ShareAlike 3.0 Unported License