He attended the public schools, and learned the printer’s trade.Later he taught school and became superintendent of the Millersburg, Indiana School District.

He left that vocation and was employed by the Millersburg local newspaper in 1876 and afterward became editor and proprietor.He moved to Minnesota in 1882 and settled in Glencoe.

He was appointed a member of the Board of Regents of the State University in 1890.He was president of the State Editorial Association. 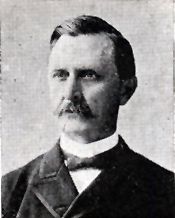