The works he designed and engraved are remarkable for the grace of the figures, and for the wonderful skill with which he retains and expresses the characteristics of the original paintings and statues.

He was a passionate admirer of Raphael, and had great success in reproducing his works.Amsler's principal engravings are: The Triumphal March of Alexander the Great, and a full-length Christ, after the sculptures of Thorwaldsen and Dannecker; the Entombment of Christ, and two Madonnas after Raphael; and the Union between Religion and the Arts, after Overbeck, his last work, on which he spent six years.His portrait album, now in the Ashmolean Museum, Oxford, includes a fine head of the poet Friedrich Rückert.(1) A family portrait of Amsler by Wilhelm von Kaulbach is now in the Victoria and Albert Museum, London.(2)The portrait on the right is also by von Kaulbach (1833). 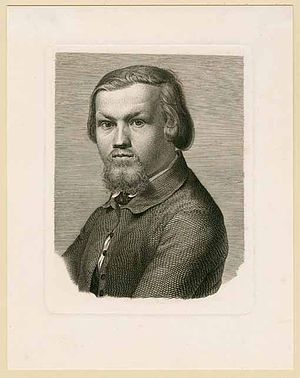 Swiss engraver
Back
This content was extracted from Wikipedia and is licensed under the Creative Commons Attribution-ShareAlike 3.0 Unported License