He studied in Leipzig from 1776, and then worked as a music conductor in theatres in Frankfurt am Main and Hamburg from 1778 to 1780.

He moved to Stockholm, Sweden in 1781 at the invitation of the German congregation there (Tyska kyrkan) to assume the position of organist, which he held until 1793.

The same year (1781) he was employed at the Royal Theatre in Stockholm as well as conductor of the orchestra for the Stenborg theatres.

He was also an instructor at Dramatens elevskola.He was married twice, first to the Swedish actress and singer Elisabeth Forsselius.

Since King Gustaf IV Adolf closed the Royal Opera (and its orchestra) in 1807, Hæffner moved to Uppsala, where in 1808 he was appointed Director musices of the university and simultaneously was employed as organist of the cathedral.

In Uppsala he organized the studentsång ("Student singing") - four-voice male choir singing.This practice rapidly spread to the other Nordic universities and is still today a coveted tradition, not only among university students, but for the last century also in many (most ?) male choirs all over Sweden.

Hæffner's passion and work for this has procured for him the name Studentsångens fader ("Father of 'studentsång').

The starting point of this tradition is usually set to a performance of Under Svea banér (words by P.D.A.

Atterbom, music by Hæffner) by a student choir celebrating the war hero Klingspor on 24 October 1808.Hæffner composed three operas, theatre music, a mass, songs with piano accompaniment, and was responsible for the new Swedish in 1819.

Noteworthy is his oratorio Försonaren på Golgatha ("The Saviour on Golgatha").Hæffner died in Uppsala on 28 May 1833. 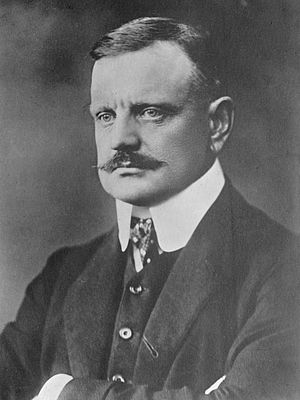 Swedish composer
Back
This content was extracted from Wikipedia and is licensed under the Creative Commons Attribution-ShareAlike 3.0 Unported License