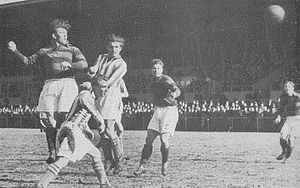 He played 21 games and scored eight goals for the Denmark national football team, with whom he won a bronze medal at the 1948 Summer Olympics.

Danish footballer
Back
This content was extracted from Wikipedia and is licensed under the Creative Commons Attribution-ShareAlike 3.0 Unported License