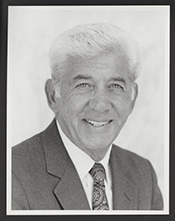 Nicholas James Mavroules (November 1, 1929 – December 25, 2003) was an American Democratic Party politician from Massachusetts.He served as Mayor of Peabody, Massachusetts for a decade, then represented Peabody and the much of the surrounding North Shore region in the United States House of Representatives from 1979 until 1993.

In 1993, he pleaded guilty to 15 counts of racketeering and extortion and later served 15 months in prison.