Georg Robert Döpel (3 December 1895 – 2 December 1982) was a German experimental nuclear physicist.He was a participant in a group known as the "first Uranverein", which was spawned by a meeting conducted by the Reichserziehungsministerium, in April 1939, to discuss the potential of a sustained nuclear reaction.

He worked under Werner Heisenberg at the University of Leipzig, and he conducted experiments on spherical layers of uranium oxide surrounded by heavy water.

He was a contributor to the German nuclear weapon project (Uranprojekt).In 1945, he was sent to Russia to work on the Soviet atomic bomb project.

He returned to Germany in 1957, and he became professor of applied physics and director of the Institut für Angewandte Physik at the Hochschule für Elektrotechnik, now Technische Universität, in Ilmenau (Thuringia). 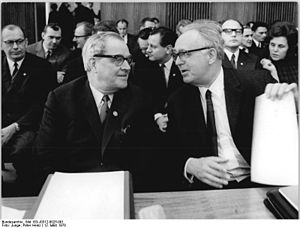