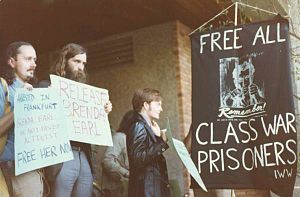 He was later alleged to be a member of the Angry Brigade, but was acquitted of related charges.He went on to found the Cienfuegos Press publishing house, as well as radical publications The Free-Winged Eagle and The Hastings Trawler, and in 2006 the online Anarchist Film Channel, which hosts films and documentaries with anarchist and libertarian socialist themes.

His memoir Granny Made Me an Anarchist was published in 2004. Anarchist writer and publisher
Back
This content was extracted from Wikipedia and is licensed under the Creative Commons Attribution-ShareAlike 3.0 Unported License