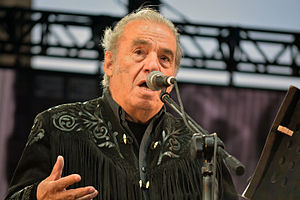 Óscar Chávez (born 20 March 1935 in Mexico City) is a Mexican singer, songwriter and actor.He was the main exponent of the Nueva Trova in Mexico in the 1960s and 1970s.

He studied theatre at the National Autonomous University of Mexico (UNAM) and has produced and acted in several plays, movies and telenovelas in Mexico.

He has achieved international fame performing his music.Songs such as Por Tí and Macondo became standard in most of Latin America, but he also recorded many Mexican folk songs.

He is also noted for his strong social commitment and the left wing ideas expressed in his lyrics.His impressive discography spans four decades.

Mexican singer
Back
This content was extracted from Wikipedia and is licensed under the Creative Commons Attribution-ShareAlike 3.0 Unported License