Édouard Daladier (French: [edwaʁ daladje]; 18 June 1884 – 10 October 1970) was a French Radical-Socialist (centre-left) politician, and the Prime Minister of France at the outbreak of World War II.

Daladier was born in Carpentras and began his political career before World War I.During the war, he fought on the Western Front and was decorated for his service.

As head of government, he expanded the French welfare state in 1939.Along with Neville Chamberlain, Benito Mussolini and Adolf Hitler, Daladier signed the Munich Agreement in 1938, which gave Nazi Germany control over the Sudetenland.

After Hitler's invasion of Poland in 1939, Britain and France declared war on Germany.During the Phoney War, France's failure to aid Finland against the Soviet Union's invasion during the Winter War led to Daladier's resignation on 21 March 1940 and his replacement by Paul Reynaud.

Daladier remained Minister of Defence until 19 May, when Reynaud took over the portfolio personally after the French defeat at Sedan.

After the Fall of France, Daladier was tried for treason by the Vichy government during the Riom Trial, and imprisoned in Fort du Portalet, the Buchenwald concentration camp and then Itter Castle.

After the Battle of Castle Itter, Daladier resumed his political career as a member of the French Chamber of Deputies from 1946 to 1958. 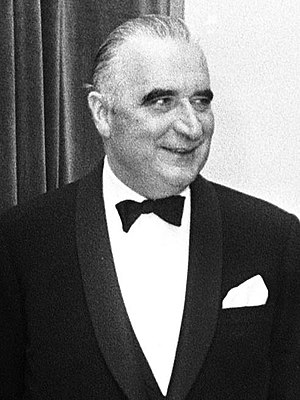 Prime Minister of France
Back
This content was extracted from Wikipedia and is licensed under the Creative Commons Attribution-ShareAlike 3.0 Unported License