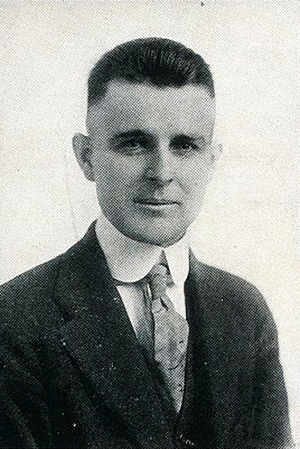 Andrew Franklin Martin (December 7, 1894 – June 9, 1982), born in Akins, Oklahoma, was a saxophonist, a bandmaster and an educational administrator and one of ten founding members of Kappa Kappa Psi, National Honorary Band Fraternity.

He was an education student at Oklahoma A&M College in the class of 1920.In 1916, Martin joined the Chi Alpha social club which was formed explicitly to petition for a charter of Lambda Chi Alpha.

The Alpha-Eta Zeta of Lambda Chi Alpha was established on the campus of Oklahoma A&M on September 15, 1917.Beyond Kappa Kappa Psi, Martin was the Managing Editor of the 1920 Redskin yearbook, a Lambda Chi Alpha delegate to the local Interfraternity Council, a member of the student senate, the vice president of the education society, a member of the YMCA cabinet, and social editor of the school newspaper Orange and Black.