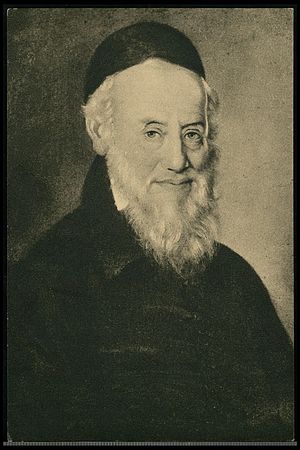 Aaron Chorin (Hebrew: אהרן חארין‎;August 3, 1766 – August 24, 1844) was a Hungarian rabbi and pioneer of early religious reform.He favored the use of the organ and of prayers in the vernacular, and was instrumental in founding schools along modern lines.

Chorin became a pivotal figure for reformers, although he himself still operated inside a traditional framework.He also interested himself in public affairs—he took an active part in the efforts for Jewish emancipation, and was very influential with the state authorities.

Hungarian rabbi
Back
This content was extracted from Wikipedia and is licensed under the Creative Commons Attribution-ShareAlike 3.0 Unported License