Abraham Bogardus (November 29, 1822 – March 22, 1908) was an American daguerreotypist and photographer who made some 200,000 daguerreotypes during his career.He was trained in the daguerreotype process by New Yorker George W.

Prosch, who in 1839 had made a camera for Samuel F.B.Morse.Bogardus opened a studio and gallery at 363 Broadway in New York in 1846, becoming very successful.

In 1868, he helped in the founding of the National Photographic Association of which he was president for five years.He worked as a clerk in a dry goods store in the late 1830s, and exhibited a painting at the American Institute in 1845.

He opened a new studio at 1153 Broadway in 1869, maintaining the 363 Broadway address.That same year he became an important witness at the trial of William H.

Mumler, a spirit photographer who had been accused of fraud by, among others, P.T.Barnum.Barnum hired Bogardus to fabricate a photograph of him with the supposed "ghost" of Abraham Lincoln; this photograph was then tendered in evidence at Mumler's trial to demonstrate to the court how easy it was to conjure fake images of ghosts.

In 1871 to 1873, he was in partnership with Daniel and David Bendann, brothers from Baltimore, Maryland, at 1153 Broadway in New York.

In 1873, Bogardus produced daguerreotypes of bank note designs for the American Bank Note Co.Wanting to retire in 1884, Bogardus advertised in the Philadelphia Photographer: "Wishing to retire from the photographic business, I now offer my well-known establishment for sale, after thirty-eight years' continuous existence in this city.

The reputation of the gallery is too well known to require one word of comment.The stock of registered negatives is very valuable, containing a large line of regular customers, and also very many of our prominent men, Presidents, Senators, etc., and for which orders are constantly received. 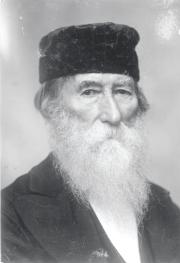 American photographer
Back
This content was extracted from Wikipedia and is licensed under the Creative Commons Attribution-ShareAlike 3.0 Unported License