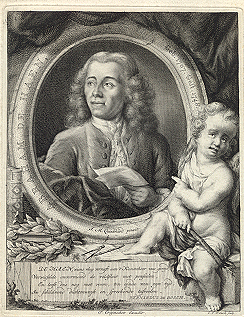 Abraham de Haen (6 April 1707 in Amsterdam – 8 August 1748 in Amsterdam), also known as Abraham de Haan, was a Dutch draughtsman and engraver known particularly for his drawings of castles and manors.

He was also a painter and poet.He referred to himself as Abraham de Haen de Jongere (Abraham de Haen the Younger) to distinguish himself from his father, who was also called Abraham.

This name also distinguishes him from the 17th-century painter .


Engraver, painter
Back
This content was extracted from Wikipedia and is licensed under the Creative Commons Attribution-ShareAlike 3.0 Unported License