He was convicted on June 8, 1934, and sentenced to death.There was quite a bit of controversy regarding the accuracy of the charge and righteousness of the conviction among the Jewish public; an outspoken supporter of Stavsky was the Chief Rabbi of Palestine, Rav Kook.

His conviction was overturned in 1934, by the highest British Court of Appeals in Palestine.He went on to work with the Irgun in smuggling thousands of Jews out of Europe during the Holocaust.

Stavsky died on the beached Altalena in the midst of exploding onboard munitions during heavy machine gun exchange with Haganah forces. 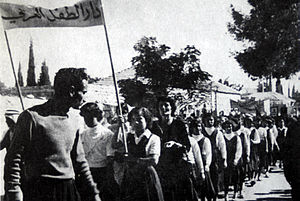 Palestinian activist
Back
This content was extracted from Wikipedia and is licensed under the Creative Commons Attribution-ShareAlike 3.0 Unported License