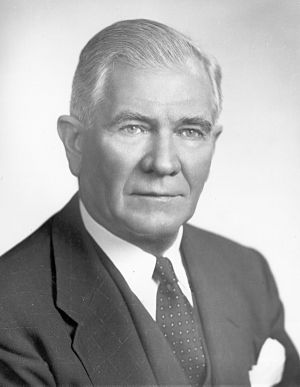 Absalom Willis Robertson (May 27, 1887 – November 1, 1971) was an American politician from Virginia who served over 50 years in public office.A member of the Democratic Party and lukewarm ally of the Byrd Organization led by fellow U.S.

Senator Harry F.Byrd, Robertson represented Virginia in the U.S.House of Representatives (1933–1946) and the U.S.Senate (1946–1966), and had earlier served in the Virginia General Assembly.

A member of the conservative coalition during his congressional career, Robertson was a vocal opponent of civil rights.Robertson was also the father of televangelist Pat Robertson.