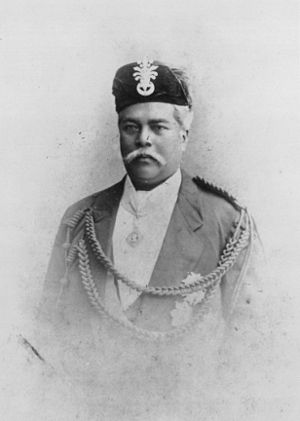 He was also informally known as "The Father of Modern Johor", as many historians accredited Johor's development in the 19th century to Abu Bakar's leadership.

He initiated policies and provided aids to ethnic Chinese entrepreneurs to stimulate the development of the state's agricultural economy which was founded by Chinese migrants from Southern China in the 1840s.

He also took charge of the development of Johor's infrastructure, administrative system, military and civil service, all of which were modelled closely along Western lines.

Abu Bakar was noted for his diplomatic skills, and both the British and Malay rulers had approached him for advice in making important decisions.

He was also an avid traveller, and became the first Malay ruler to travel to Europe during his first visit to England in 1866.

In particular, Abu Bakar became a lifetime friend of Queen Victoria in his later years.Abu Bakar's friendship with Queen Victoria played an important role in shaping Johor's relationships with Britain, and was the only state by the end of the 19th century in the Peninsular Malaya to maintain autonomy in its internal affairs as the British Colonial Government pushed for greater control over the Malay states by placing a British Resident in the states.

He was also an Anglophile, and many of his personal habits and decisions were aligned to European ideas and tastes.

In 1885, Abu Bakar sought legal recognition from Britain for another change in his legal state title of "Maharaja" to a regal title of "Sultan", and was proclaimed the following year.

Sultan of Johor
Back
This content was extracted from Wikipedia and is licensed under the Creative Commons Attribution-ShareAlike 3.0 Unported License