He was educated in Sackville, studied law with Edward Barron Chandler and was admitted to the bar in 1846.In 1850, he married Martha Ann Welden.

Palmer practiced law in Dorchester until 1867 when he moved to Saint John.In the same year, he became a Queen's Counsel.

John in 1870.Palmer was elected to the House of Commons of Canada as a member of the Liberal Party of Canada on October 12, 1872, to represent the riding of the City and County of St. 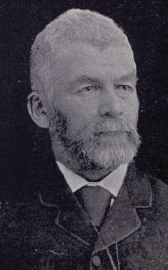