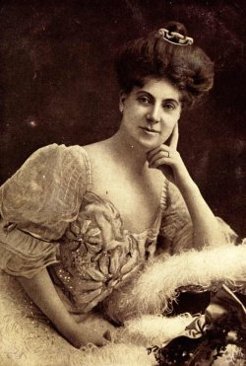 Ada Jemima Crossley (3 March 1871 – 17 October 1929) was an Australian contralto notable as the first Red Seal recording artist engaged in the US by the Victor Talking Machine Company in 1903.

Born at Tarraville, Gippsland, Victoria, she was the daughter of Edwards Wallis Crossley (died 11 April 1902), an ironmonger, and Harriette, née Morris, both from Northamptonshire, England.

Ada was the sixth surviving child in a family of twelve children.Crossley's singing in the country met with so much appreciation that she was sent to Melbourne to be trained, where Sir Frederic Cowen, (who had come from London to conduct the orchestra at the Melbourne International Exhibition of 1888–9), heard her sing and gave her advice.

She studied under Madame Fanny Simonsen for singing, and under Alberto Zelman the elder for piano and harmony.Her first appearance was with the Philharmonic Society at Melbourne in 1889.

She sang frequently in Melbourne at concerts and in oratorio, and was the principal contralto in the choir of Charles Strong's Australian Church.

She made her début performance in Sydney in January 1892, and also became well known there, too.In 1894, she went to Europe and studied under Mathilde Marchesi for voice production, and under (Sir) Charles Santley for oratorio work.

Her first appearance in London was at the Queen's Hall on 18 May 1895, when she had an immediate success.For many years she held a leading place at music festivals and on the concert platform, and she gave five command performances before Queen Victoria in two years.

She sang regularly at English festivals until 1913 but retired a few years later, though she made occasional appearances for charity.

She never lost her love for her native country and her London house was always open to young singers and artists from Australia.

There they received advice, hospitality, and sometimes assistance, without any suggestion of patronage.

Australian singer
Back
This content was extracted from Wikipedia and is licensed under the Creative Commons Attribution-ShareAlike 3.0 Unported License