In his youth, he was a member of the Revolutionary Association of the Nation's Youth, the Union of Active Struggle and the Riflemen's Association.

He then became a commandant of the Polish Military Organisation, first in the Warsaw district, and then its Commandant-in-Chief.Adam Koc was one of the officers of the Polish Legions and a member of so-called Convent of Organisation A.

In the Second Polish Republic, Adam Koc joined the Polish Armed Forces, in December 1919, where he was given command of the 201 Infantry Regiment of Warsaw's Defense, which later became a Volunteer Division (31 July - 3 December 1920).

Afterwards, he served in the Ministry of Military Affairs, in different positions.A participant in the May Coup, he was promoted in 1926 to be chief of the Command of VI District of Corps in Lwów, a position he held until 1928.

Considered a member of Piłsudski's colonels group, he was elected to the Sejm three times and once to the Senate.

He was also multiple times in office, mostly in financial positions (he was Vice-Minister of Treasury and head of the Bank of Poland).

He was one of the negotiators of loans to the Second Polish Republic from the UK and France.As a Sanational politician, he created the newspaper Gazeta Polska, published from 1929 to 1939.

He was editor-in-chief of its Sanational predecessor Głos Prawdy in 1929.After Piłsudski died in May 1935, Adam Koc joined the people close to Edward Rydz-Śmigły.

He became commandant-in-chief of the Association of Polish Legionists.In 1936–1937, Koc started co-creating a new political entity, the Camp of National Unity (OZN).

He became its head a year later.He was supportive of the idea of OZN's approach towards the radical right National Radical Camp Falanga and right-wing National Democracy.

As World War II started, Koc coordinated the evacuation of the Bank of Poland's gold reserves.He served as Minister of Finance, Trade and Industry for a short period in 1939, before he fled to the US in 1940.

He became one of the active members of the Józef Piłsudski Institute of America and died, still in exile, in 1969. 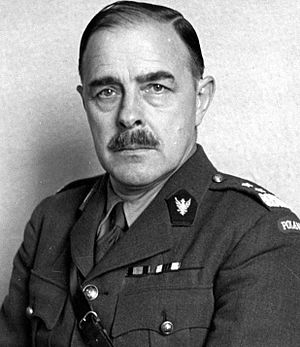 Polish politician
Back
This content was extracted from Wikipedia and is licensed under the Creative Commons Attribution-ShareAlike 3.0 Unported License