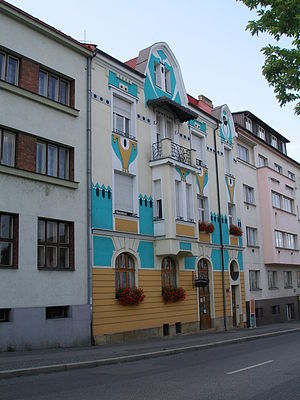 Adina Mandlová (28 January 1910 in Mladá Boleslav – 16 June 1991 in Příbram, Czechoslovakia) was a Czech actress, sex-symbol of the 1930s and a European movie star.The most controversial, involved in a lot of scandals, drinking alcohol, undertaking love affairs and then almost lynched...

Adina Mandlová is a legend.According to one source, her true first name was Jarmila, but she had more front names and later she chose Adina, probably because it was chosen by her father for his favourite child.

She was born in Mladá Boleslav and after her father died when Adina was only 7 years old, she grew up in an unstable family.

After changing several schools, she eventually became a model girl.Her film career started in 1932 thanks to a second-rate movie Děvčátko, neříkej ne! (Girl, don't say no!), where she performed...a model girl.

Later she attracted Hugo Haas, who began to keep close company with her and (later moved together as partners) and recommended her to respected directors like Vávra or Frič.

By the way, at that time she refused a role in Machatý's scandalous movie Extáze (Extasis, 1933), which was probably her life's fault, because the performer of the title role, [Hedy Kiesler, later succeeded in Hollywood as Hedy Lamarre.

However, during a short time Mandlová became an unofficial Number One among Czech actresses.The top of her career was Kristián (1939).

During the WW II Mandlová led a wild life and rumours about her scandals caused a growing aversion against her.

For example, there was a rumour that she was a mistress of the German protector K.H.Frank (which was not true, and Frank disliked her because of it.).

She was also invited to Germany, where Goebbels promised her big career, under condition that she chose a better pseudonym.

However, her stay in Berlin soon ended due to Frank's intrigues.After the end of the war it showed that popular "rumours" concerning her alleged contacts with Nazis were malicious fabrications and she actually helped her former boyfriend, who had escaped from a concentration camp.

However, the public demand for her punishment was stronger than facts.In May 1945 she was arrested and according to her own memoirs, one warder, who was her big fan, saved her from lynching in the front of the prison. (That she can really thank him a lot can be illustrated by the fact that director Jan Sviták, an alleged Nazi quisling, was then lynched and subsequently shot death in a Prague street.) Then she was strongly persecuted and eventually married British pilot Joe Knight, which enabled her to emigrate to the Great Britain (1947).

Here she tried to continue in her film career, but with changeable success.In 1948 she acted in a movie The Fool And The Princess, but that was practically everything, because soon after she was taken ill with tuberculosis and healed in Switzerland.

Her marriage crashed and Mandlová was forced to earn money by different ways, among other things as a collaborator of a costume designer Ben Pearson, whom she later married.

In the end, she lived in Malta together with her husband.Here she also wrote a bitter biography Dnes se tomu směju (Today I Am Laughing Over It, 1976).