Michele Tripisciano (13 July 1860 – 21 September 1913) was an Italian sculptor.He was born in Caltanissetta, the son of the potter Ferdinando Tripisciano and Calogera Falci.

He started modelling clay when he was a child in his father's jags factory and in 1873 he was sent to study in Rome at the St Michael Ospice thanks to the involvement of the baron Guglielmo Luigi Lanzirotti and Mr Pugliese.

Between 1880 and 1888 he worked with Francesco Fabi Altini and in 1884 he obtained the silver medal at the Accademia di San Luca for his work Caio Mario sulle rovine di Cartagine (Gaius Marius on the ruins of Carthage).

He lived in Rome for many years and then returned to his home town when he died at the age of 53 because of a bronchopneumonia.

In 1900 he received the Knight's Cross from king Umberto I of Italy and in 1912 he was awarded a Knight's Cross of the Order of Saints Maurice and Lazarus by Vittorio Emanuele III di Savoia. 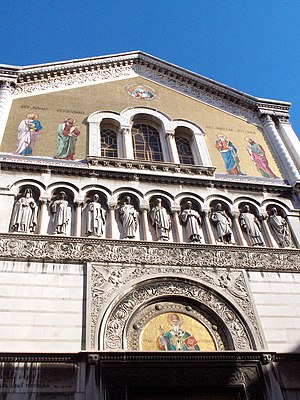 Italian sculptor
Back
This content was extracted from Wikipedia and is licensed under the Creative Commons Attribution-ShareAlike 3.0 Unported License