He served as president of the Alliance Israélite Universelle (1863-67; 1868-80), secured French citizenship for Algerian Jews under French rule through the Crémieux Decree (1870), and was a staunch defender of the rights of the Jews of France. 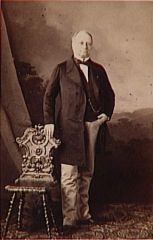 French politician
Back
This content was extracted from Wikipedia and is licensed under the Creative Commons Attribution-ShareAlike 3.0 Unported License