Lieutenant Commander Edward Henry O'Hare (March 13, 1914 – November 26, 1943) was an American naval aviator of the United States Navy, who on February 20, 1942, became the Navy's first fighter ace of the war when he single-handedly attacked a formation of nine heavy bombers approaching his aircraft carrier.

Even though he had a limited amount of ammunition, he was credited with shooting down five enemy bombers and became the first naval aviator recipient of the Medal of Honor in World War II.

O'Hare's final action took place on the night of November 26, 1943, while he was leading the U.S.Navy's first-ever nighttime fighter attack launched from an aircraft carrier.

During this encounter with a group of Japanese torpedo bombers, O'Hare's Grumman F6F Hellcat was shot down; his aircraft was never found.

An F4F Wildcat in a livery identical to the aircraft flown by O'Hare, ("White F-15") is currently on display in Terminal 2.

The display was formally opened on the Seventy-fifth anniversary of his Medal of Honor flight. 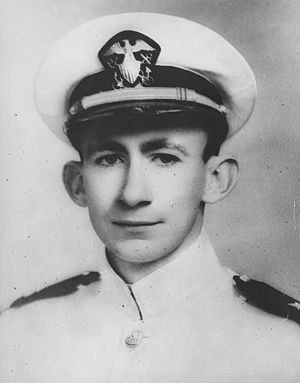