Alexander Gordon Higgins (18 March 1949 – 24 July 2010) was a Northern Irish professional snooker player who is remembered as one of the most iconic figures in the game.

He was also World Doubles champion with Jimmy White in 1984, and won the World Cup three times with the All-Ireland team.

Higgins came to be known as the "People's Champion" because of his popularity, and is often credited with having brought the game of snooker to a wider audience, contributing to its peak in popularity in the 1980s.

He had a reputation as an unpredictable and difficult character.He was a heavy smoker, struggled with drinking and gambling, and admitted to using cocaine and marijuana.

First diagnosed with throat cancer in 1998, Higgins died of multiple causes in his Belfast home on 24 July 2010. 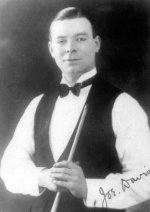 Snooker player
Back
This content was extracted from Wikipedia and is licensed under the Creative Commons Attribution-ShareAlike 3.0 Unported License