He is considered one of the best defensemen in Soviet ice hockey history, winning three Olympic gold medals and ten world titles.

Ragulin began training in ice hockey in 1957 with Khimik Voskrosensk.In 1962 he moved to CSKA Moscow and played with that team until retiring in 1973.

In 1972 he played six out of eight games of the legendary Summit Series between Canada and Soviet Union.After retiring from competitions, Ragulin coached SKA Novosibirsk and worked with children at the CSKA Moscow sports school.

He was inducted to the IIHF Hall of Fame in 1997 and in 2001 received the Olympic Order in Silver. 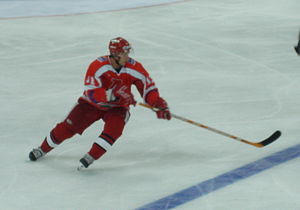 Russian ice hockey player
Back
This content was extracted from Wikipedia and is licensed under the Creative Commons Attribution-ShareAlike 3.0 Unported License