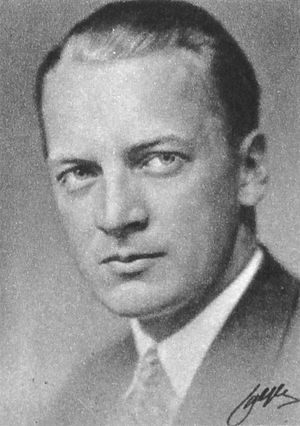 Sven Erik Alf Sjöberg (21 June 1903 – 17 April 1980) was a Swedish theatre and film director.He won the Grand Prix du Festival at the Cannes Film Festival twice: in 1946 for Iris and the Lieutenant (Swedish: Iris och löjtnantshjärta) (part of an eleven-way tie), and in 1951 for his film Miss Julie (Swedish: Fröken Julie) (an adaptation of August Strindberg's play which tied with Vittorio De Sica's Miracle in Milan).Despite his success with films Torment (1944) and Miss Julie, Sjöberg was foremost a stage director; perhaps the greatest at Dramaten (alongside first Olof Molander and later Ingmar Bergman).

He was a First Director of Sweden's Royal Dramatic Theatre in the years 1930–1980, where he staged a large number of remarkable and historic productions.

Sjöberg was also a pioneer director of drama for early Swedish TV (his 1955 TV production of Hamlet is a national milestone).

At the 3rd Guldbagge Awards Sjöberg won the award for Best Director for the film Ön.Sjöberg died in a car accident on his way to rehearsal at the Royal Dramatic Theatre in Stockholm.