Dereser was a Catholic representative of the Enlightenment, and promoted a rationalistic interpretation of the Bible.He had a marked tendency to take independent positions and defy authority—both secular and ecclesiastical—which involved him in numerous controversies and nearly cost him his life during the French Revolution.

As the Catholic Encyclopedia noted of him in 1913, "Dereser's combative character got him in trouble everywhere, and, though believing himself a good Catholic, he was imbued with a rationalistic, anti-Roman spirit", which made him "imbued with the shallow Rationalism of his time" and therefore "explaining away everything supernatural in Scripture and religion".

This made all his writings "tainted" in the eyes of the Church authorities, though only one was placed on the Index Librorum Prohibitorum (see below) and that without the name of the author - testifying to the Church's appreciation of his talent, in spite of its dislike of his rationalism. 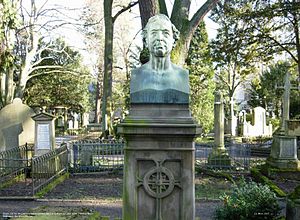 German Catholic theologian
Back
This content was extracted from Wikipedia and is licensed under the Creative Commons Attribution-ShareAlike 3.0 Unported License