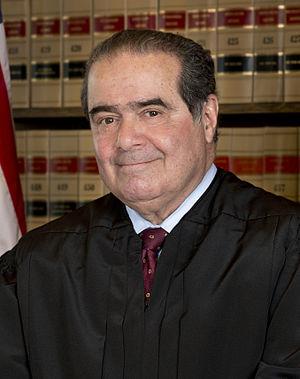 He was described as the intellectual anchor for the originalist and textualist position in the Court's conservative wing.For catalyzing an originalist and textualist movement in American law, he has been described as one of the most influential jurists of the twentieth century, and one of the most important justices in the Supreme Court's history.

Scalia was posthumously awarded the Presidential Medal of Freedom in 2018 by President Donald Trump, and the Antonin Scalia Law School at George Mason University was named in his honor.

Scalia was born in Trenton, New Jersey.A devout Catholic, he received his undergraduate degree from Georgetown University.He then obtained his law degree from Harvard Law School and spent six years in a Cleveland law firm before becoming a law professor at the University of Virginia.

In the early 1970s, he served in the Nixon and Ford administrations, eventually becoming an Assistant Attorney General.He spent most of the Carter years teaching at the University of Chicago, where he became one of the first faculty advisers of the fledgling Federalist Society.

In 1982, President Ronald Reagan appointed Scalia as a judge of the U.S.Court of Appeals for the District of Columbia Circuit.

In 1986, he was appointed to the Supreme Court by Reagan and was unanimously confirmed by the Senate, becoming the Court's first Italian-American justice.

Scalia espoused a conservative jurisprudence and ideology, advocating textualism in statutory interpretation and originalism in constitutional interpretation.He peppered his colleagues with "Ninograms" (memos named for his nickname, "Nino") which sought to persuade them to agree with his point of view.

He was a strong defender of the powers of the executive branch.He believed that the Constitution permitted the death penalty and did not guarantee the right to abortion or same-sex marriage.

Furthermore, Scalia viewed affirmative action and other policies that afforded special protected status to minority groups as unconstitutional.Such positions would earn him a reputation as one of the most conservative justices on the Court.

He filed separate opinions in many cases, often castigating the Court's majority using scathing language.Scalia's most significant opinions include his lone dissent in Morrison v.

Heller (holding that the 2nd Amendment to the U.S.Constitution guarantees a right to individual handgun ownership). Associate Justice of the Supreme Court
Back
This content was extracted from Wikipedia and is licensed under the Creative Commons Attribution-ShareAlike 3.0 Unported License