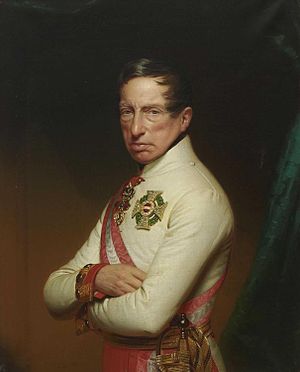 He was also the younger brother of Francis II, Holy Roman Emperor.Despite being epileptic, Charles achieved respect both as a commander and as a reformer of the Austrian army.

He was considered one of Napoleon's more formidable opponents and one of the greatest generals of the French Revolutionary Wars.

He began his career fighting the revolutionary armies of France.Early in the wars of the First Coalition, he saw victory at Neerwinden in 1793, before being defeated at Wattignies 1793 and Fleurus 1794.

In 1796, as chief of all Austrian forces on the Rhine, Charles defeated Jean-Baptiste Jourdan at Amberg and Würzburg, and then won a victory at Emmendingen that forced Jean Victor Marie Moreau to withdraw across the Rhine.

He also defeated opponents at Zürich, Ostrach, Stockach, and Messkirch in 1799.He reformed Austria's armies to adopt the nation-at-arms principle.

In 1809, he entered the War of the Fifth Coalition and inflicted Napoleon's first major setback at Aspern-Essling, before suffering a defeat at the bloody Battle of Wagram.

After Wagram, Charles saw no more significant action in the Napoleonic Wars.As a military strategist, Charles was able to successfully execute complex and risky maneuvers of troops.

However, his contemporary Carl von Clausewitz criticized his rigidity and adherence to "geographic" strategy.Austrians nevertheless remember Charles as a hero of the French Revolutionary and Napoleonic wars.

Archduke of Austria
Back
This content was extracted from Wikipedia and is licensed under the Creative Commons Attribution-ShareAlike 3.0 Unported License