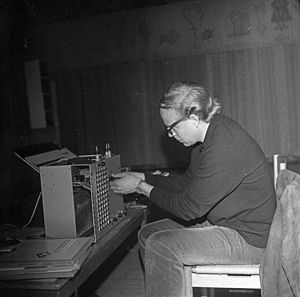 Arne Nordheim (20 June 1931 – 5 June 2010) was a Norwegian composer.Nordheim received numerous awards for his compositions, and from 1982 lived in the Norwegian government's honorary residence, Grotten, next to the Royal Palace in Oslo.

He was elected an honorary member of the International Society for Contemporary Music in 1997.On 18 August 2006, Arne Nordheim received a doctor honoris causa degree at the Norwegian Academy of Music.

He died at the age of 78 and was given a state funeral. Norwegian composer
Back
This content was extracted from Wikipedia and is licensed under the Creative Commons Attribution-ShareAlike 3.0 Unported License