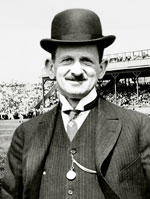 Bernhard "Barney" Dreyfuss (February 23, 1865 – February 5, 1932) was an executive in Major League Baseball who owned the Pittsburgh Pirates franchise from 1900 to his death.

He was inducted into the National Baseball Hall of Fame in 2008.Dreyfuss is often credited with the creation of the modern baseball World Series.

He also built one of baseball's first modern steel and concrete baseball parks, Forbes Field, in 1909.During his period of ownership, the Pirates won six National League pennants and World Series titles in 1909 and 1925; only the New York Giants won more NL championships (10) during the same period.