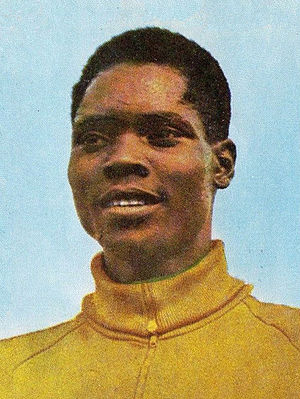 Benjamin Wabura Jipcho (1 March 1943 – 24 July 2020) was a track and field athlete from Kenya, who won the silver medal in the 3000 metres steeplechase at the 1972 Summer Olympics, behind teammate Kipchoge Keino.

Jipcho may be as well known for his role in Keino's victory over Jim Ryun in the high altitude 1968 Summer Olympics in Mexico City as for his own athletic accomplishments.

Sacrificing his own chances for a medal to team tactics, he pulled Keino through a 56-second first 400 metres, before being passed by his teammate with 800 metres to go and drifting back into the pack.

By that point, Keino had established a lead of 20 metres or more, which Ryun's famous finishing speed could not erase.

It makes you run first." His granddaughter is also a runner, while he was a distant uncle to the siblings Linet Masai and Moses Masai.

He won the silver medal in the 3000m steeplechase at the 1970 Commonwealth Games held in Edinburgh, Scotland, finishing in front of fellow Kenyan competitor and the winner of the Gold Medal in the event at the 1968 Summer Olympics in Mexico City, Amos Biwott, who this time collected bronze.

According to his daughter, he died of cancer in Fountain Hospital in Eldoret, Kenya.