Giovanni Martinolich (22 June 1884 – 25 July 1910) was an Italian chess master.He was born in Trieste (then Austria-Hungary Empire), the son of Dr Giovanni Martinolich (Padrincich or Padrinzi of Lussinpiccolo), a lawyer, Sec. of the Austrian Association of Maritime law and legal advisor to the British and US Consulates and Anna Gerolimich of Lussinpiccolo a ship owner.

He studied in Vienna.In 1905/06, he took 4th, behind Leopold Löwy, Jr, Milan Vidmar and Savielly Tartakower, in campionato di Vienna.

In 1910, he published an article Il Fegatello nell'apertura Spagnola in the Rivista Scacchistica Italiana.He died suddenly at the age of 26, of heart related causes. 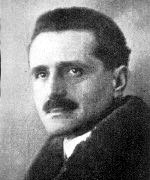 Italian chess player
Back
This content was extracted from Wikipedia and is licensed under the Creative Commons Attribution-ShareAlike 3.0 Unported License