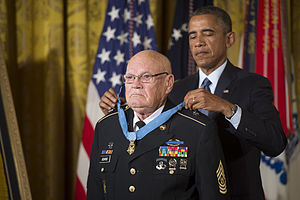 Bennie Gene Adkins (February 1, 1934 – April 17, 2020) was a United States Army soldier and recipient of the U.S. military's highest decoration, the Medal of Honor, for his actions during the Vietnam War.

In March 1966 Adkins distinguished himself during a 38-hour close-combat battle against North Vietnamese Army forces during the Battle of A Shau.

At the time of the cited action, Adkins was a sergeant first class serving as an Intelligence Sergeant with Detachment A-102, 5th Special Forces Group, 1st Special Forces.

Medal of Honor recipient
Back
This content was extracted from Wikipedia and is licensed under the Creative Commons Attribution-ShareAlike 3.0 Unported License