March 25, 1910 – April 30, 2012) was an Israeli encyclopedist, historian, and medievalist.He served as Professor of History at Cornell University.A scholar of Judaic history, he was also an activist in the Revisionist Zionism movement, who lobbied in the United States to support the creation of the Jewish state.

His field of expertise was the history of the Jews in Spain.He was an editor of the Hebrew Encyclopedia and Ze'ev Jabotinsky's personal secretary.Netanyahu was the father of former Israeli Prime Minister Benjamin Netanyahu and Yonatan Netanyahu, ex-commander of Sayeret Matkal, as well as Iddo Netanyahu, a physician, author and playwright. 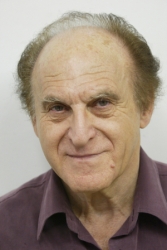 Israeli historian
Back
This content was extracted from Wikipedia and is licensed under the Creative Commons Attribution-ShareAlike 3.0 Unported License