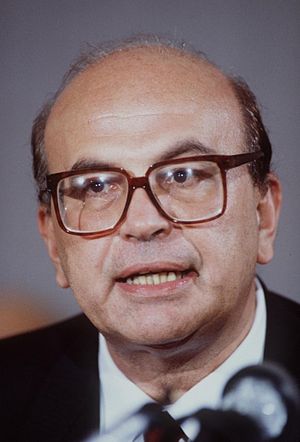 He was the first Italian Socialist Party member to become Prime Minister and the third from a socialist party to hold the office.

He led the third-longest government in the Italian Republic and he is considered one of the most powerful and prominent politicians of the so-called First Republic.

Craxi was involved in investigations conducted by Mani Pulite judges in Milan, eventually being convicted for corruption and illicit financing of the PSI.

He always rejected the charges of corruption while admitting to the illegal funding which permitted costly political activity, the PSI being less financially powerful than the two larger parties, Christian Democracy and the Communists.

Craxi maintained strong links with many leaders of the European left, including François Mitterrand, Felipe González, Andreas Papandreou and Mário Soares and was one of the main representatives of Mediterranean or South European socialism.

Craxi's supporters especially praised his foreign policy, which was assertive and often led to confrontations with the United States, on issues such as Palestine, terrorism and Craxi's close relations with Arab socialist governments.

Craxi was often nicknamed by his detractors il Cinghialone ("The Big Boar") due to his physical size.This name was given him by his long-time ally and rival at the same time, Christian Democratic leader Giulio Andreotti.