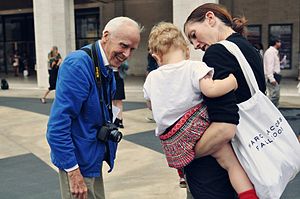 William John Cunningham Jr. (March 13, 1929 – June 25, 2016) was an American fashion photographer for the New York Times, known for his candid and street photography.

A Harvard University dropout, he first became known as a designer of women's hats before moving on to writing about fashion for Women's Wear Daily and the Chicago Tribune.

He began taking candid photographs on the streets of New York City, and his work came to the attention of the New York Times with a 1978 capture of Greta Garbo in an unguarded moment.

Cunningham reported for the paper from 1978 to 2016.Cunningham was hospitalized for a stroke in New York City in June 2016 and died soon after.


American photographer
Back
This content was extracted from Wikipedia and is licensed under the Creative Commons Attribution-ShareAlike 3.0 Unported License