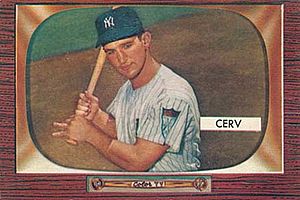 Robert Henry Cerv ( sərv;May 5, 1925 – April 6, 2017) was an American professional baseball left fielder.Prior to his professional career, he was a collegiate baseball and basketball player at the University of Nebraska.

He was born in Weston, Nebraska and served in the U.S.Navy during World War II.