Brian Howard Clough ( KLUF; 21 March 1935 – 20 September 2004) was an English football player and manager, being one of only four managers to have won the English league while managing two different clubs.

He played as a striker and remains one of the Football League's highest goalscorers, but his career was shortened by a serious injury.

As a manager, Clough's name is closely associated with that of Peter Taylor, who served as his assistant manager at various clubs in the 1960s, 1970s and 1980s.

They achieved great successes with Derby County and Nottingham Forest.Clough is also remembered for giving frequent radio and television interviews in which he made controversial remarks about players, other managers and the overall state of the game.

During his playing career with Middlesbrough and Sunderland, Clough scored 251 league goals from 274 starts, making him the third most prolific scorer in the league.

He also won two England caps, both in 1959.Clough retired from playing at the age of 29, after sustaining anterior cruciate ligament damage.

In 1965, Clough took the manager's job at Fourth Division Hartlepools United and appointed Peter Taylor as his assistant, the start of an enduring partnership that would bring them success at several clubs over the next two decades.

In 1973, they reached the semi-finals of the European Cup.However, by this point, Clough's relationship with chairman Sam Longson had deteriorated; he and Taylor resigned.

This was followed by an eight-month spell in charge of Third Division Brighton & Hove Albion, before Clough (without Taylor) returned north in the summer of 1974 to become manager of Leeds United.

This was widely regarded as a surprise appointment, given his previous outspoken criticism of the Leeds players and their manager Don Revie.

He was sacked after just 44 days in the job.Within months, Clough had joined Second Division Nottingham Forest and he was re-united with Taylor in the summer of 1976.

In 1977, Forest were promoted to the top flight and the following season won the league title (the first in the club's history), making Clough one of only four managers to have won the English league with two clubs.

Forest were relegated from the Premier League in 1993, after which Clough retired from football.Charismatic, outspoken and often controversial, Clough is considered one of the greatest managers of the English game.

His achievements with Derby and Forest, two struggling provincial clubs with little prior history of success, are rated among the greatest in football history.

His teams were also noted for playing attractive football and for their good sportsmanship.Despite applying several times and being a popular choice for the job, he was never appointed England manager and has been dubbed the "greatest manager England never had". 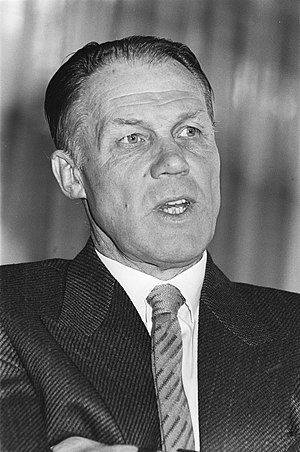 Football Manager
Back
This content was extracted from Wikipedia and is licensed under the Creative Commons Attribution-ShareAlike 3.0 Unported License