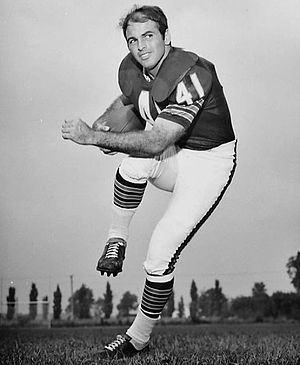 Louis Brian Piccolo (October 31, 1943 – June 16, 1970) was an American professional football player, a running back for the Chicago Bears of the National Football League (NFL) for four years.

He died at age 26 from embryonal cell carcinoma, an aggressive form of germ cell testicular cancer, first diagnosed after it had spread to his chest cavity.

Piccolo was the subject of the 1971 TV movie Brian's Song, with a remake TV movie of the same name filmed in 2001.

He was portrayed in the original film by James Caan and by in the 2001 remake.