Cabell "Cab" Calloway III (December 25, 1907 – November 18, 1994) was an American jazz singer, dancer, bandleader and actor.He was associated with the Cotton Club in Harlem, where he was a regular performer and became a popular vocalist of the swing era.

His niche of mixing jazz and vaudeville won him acclaim during a career that spanned over 65 years.Calloway was a master of energetic scat singing and led one of the most popular dance bands in the United States from the early 1930s to the late 1940s.

Calloway had several hit records in the 1930s and 1940s, becoming known as the "Hi-de-ho" man of jazz for his most famous song, "Minnie the Moocher", originally recorded in 1931.

He reached the Billboard charts in five consecutive decades (1930s–1970s).Calloway also made several stage, film, and television appearances until his death in 1994 at the age of 86.

Calloway was the first African American musician to sell a million records from a single and to have a nationally syndicated radio show.

In 1993, Calloway received the National Medal of Arts from the United States Congress.He posthumously received the Grammy Lifetime Achievement Award in 2008.

His song "Minnie the Moocher" was inducted into the Grammy Hall of Fame in 1999, and added to the Library of Congress' National Recording Registry in 2019. 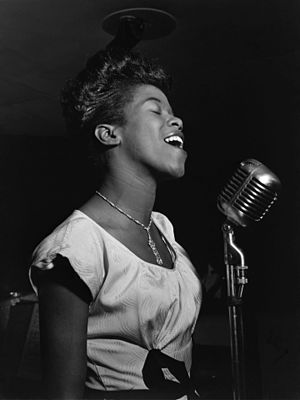 Jazz singer
Back
This content was extracted from Wikipedia and is licensed under the Creative Commons Attribution-ShareAlike 3.0 Unported License