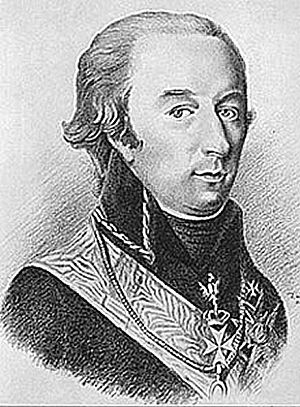 Carl Olof Cronstedt the elder (3 October 1756 – 7 April 1820) was a Swedish naval commander responsible for the overwhelming Swedish victory at the Second Battle of Svensksund, one of the largest naval battles in history.

He is often better remembered, however, as the commander of the fortress of Sveaborg (Finnish: Suomenlinna) during the Finnish War in 1808–09, which was fought between Sweden and Imperial Russia, and ended in Cronstedt surrendering the fortress.

Swedish admiral
Back
This content was extracted from Wikipedia and is licensed under the Creative Commons Attribution-ShareAlike 3.0 Unported License