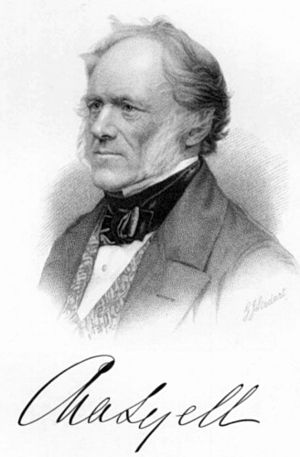 He is best known as the author of Principles of Geology (1830–33), which presented to a wide public audience the idea that the earth was shaped by the same natural processes still in operation today, operating at similar intensities.

The philosopher William Whewell termed this gradualistic view "uniformitarianism" and contrasted it with catastrophism, which had been championed by Georges Cuvier and was better accepted in Europe.

The combination of evidence and eloquence in Principles convinced a wide range of readers of the significance of "deep time" for understanding the earth and environment.

Lyell's scientific contributions included a pioneering explanation of climate change, in which shifting boundaries between oceans and continents could be used to explain long-term variations in temperature and rainfall.

Lyell also gave influential explanations of earthquakes and developed the theory of gradual "backed up-building" of volcanoes.In stratigraphy his division of the Tertiary period into the Pliocene, Miocene, and Eocene was highly influential.

He incorrectly conjectured that icebergs may be the impetus behind the transport of glacial erratics, and that silty loess deposits might have settled out of flood waters.

His creation of a separate period for human history, entitled the 'Recent', is widely cited as providing the foundations for the modern discussion of the Anthropocene.

Building on the innovative work of James Hutton and his follower John Playfair, Lyell favoured an indefinitely long age for the earth, despite evidence suggesting an old but finite age.

He was a close friend of Charles Darwin, and contributed significantly to Darwin's thinking on the processes involved in evolution.

As Darwin wrote in On the Origin of Species, "He who can read Sir Charles Lyell's grand work on the Principles of Geology, which the future historian will recognise as having produced a revolution in natural science, yet does not admit how incomprehensibly vast have been the past periods of time, may at once close this volume." Lyell helped to arrange the simultaneous publication in 1858 of papers by Darwin and Alfred Russel Wallace on natural selection, despite his personal religious qualms about the theory.

He later published evidence from geology of the time man had existed on the earth. 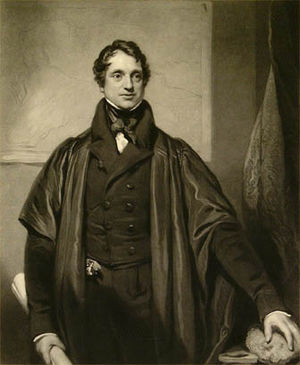 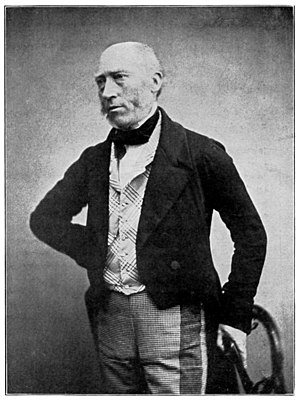 Scottish geologist
Back
This content was extracted from Wikipedia and is licensed under the Creative Commons Attribution-ShareAlike 3.0 Unported License