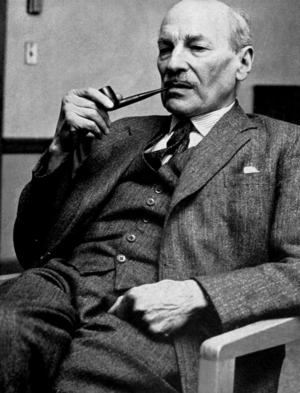 He was Deputy Prime Minister during the wartime coalition government under Winston Churchill, and served twice as Leader of the Opposition from 1935 to 1940 and from 1951 to 1955.

Attlee was born into an upper-middle-class family, the son of a wealthy London solicitor.After attending the public school Haileybury College and the University of Oxford, he practised as a barrister.

The volunteer work he carried out in London's East End exposed him to poverty and his political views shifted leftwards thereafter.

He joined the Independent Labour Party, gave up his legal career, and began lecturing at the London School of Economics.

His work was interrupted by service as an officer in the First World War.In 1919, he became mayor of Stepney and in 1922 was elected Member of Parliament for Limehouse.

Attlee served in the first Labour minority government led by Ramsay MacDonald in 1924, and then joined the Cabinet during MacDonald's second minority (1929–1931).

After retaining his seat in Labour's landslide defeat of 1931, he became the party's Deputy Leader.Elected Leader of the Labour Party in 1935, and at first advocating pacificism and opposing re-armament, he became a critic of Neville Chamberlain's appeasement of Hitler and Mussolini in the lead-up to the Second World War.

Attlee took Labour into the wartime coalition government in 1940 and served under Winston Churchill, initially as Lord Privy Seal and then as Deputy Prime Minister from 1942.

Following the end of World War II in Europe, the coalition was dissolved and Attlee led Labour to a landslide victory at the 1945 general election, forming the first Labour majority government.

His government's Keynesian approach to economic management aimed to maintain full employment, a mixed economy and a greatly enlarged system of social services provided by the state.

To this end, it undertook the nationalisation of public utilities and major industries, and implemented wide-ranging social reforms, including the passing of the National Insurance Act 1946 and National Assistance Act, the formation of the National Health Service (NHS) in 1948, and the enlargement of public subsidies for council house building.

In foreign policy, Attlee delegated to Ernest Bevin, but oversaw the partition of India (1947), the independence of Burma and Ceylon, and the dissolution of the British mandates of Palestine and Transjordan.

He and Bevin encouraged the United States to take a vigorous role in the Cold War; unable to afford military intervention in Greece, he called on Washington to counter Communists there, establishing the Truman Doctrine.

He supported the Marshall Plan to rebuild Western Europe with American money and, in 1949, promoted the NATO military alliance against the Soviet bloc.

After leading Labour to a narrow victory at the 1950 general election, he sent British troops to fight in the Korean War.

Attlee had inherited a country close to bankruptcy after the Second World War and beset by food, housing and resource shortages; despite his social reforms and economic programme, these problems persisted throughout his premiership, alongside recurrent currency crises and dependence on US aid.

His party was narrowly defeated by the Conservatives in the 1951 general election, despite winning the most votes.He continued as Labour leader but retired after losing the 1955 election and was elevated to the House of Lords; he died in 1967.

In public, he was modest and unassuming, but behind the scenes his depth of knowledge, quiet demeanour, objectivity and pragmatism proved decisive.

Often rated as one of the greatest British prime ministers, Attlee's reputation among scholars has grown, thanks to his creation of the modern welfare state and involvement in building the coalition against Joseph Stalin in the Cold War.

He remains the longest-serving Labour leader in British history.