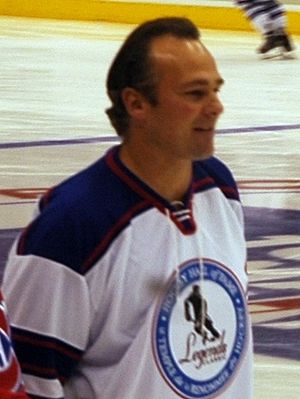 Dale Hawerchuk (April 4, 1963 – August 18, 2020) was a Canadian professional ice hockey player and coach.Drafted first overall by the Winnipeg Jets in the 1981 NHL Entry Draft, Hawerchuk played in the National Hockey League (NHL) for 16 seasons as a member of the Jets, Buffalo Sabres, St.

Louis Blues and Philadelphia Flyers.He won the NHL's Calder Memorial Trophy as the league's Rookie of the Year in 1982 and was elected to the Hockey Hall of Fame in his second year of eligibility in 2001.

Hawerchuk served as the head coach of the Barrie Colts of the Ontario Hockey League from 2010 to 2019.

Canadian ice hockey player and coach
Back
This content was extracted from Wikipedia and is licensed under the Creative Commons Attribution-ShareAlike 3.0 Unported License