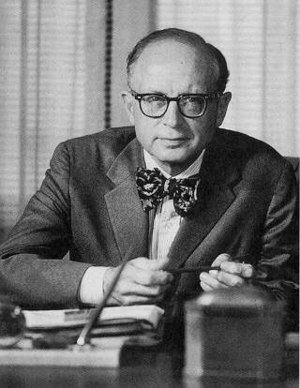 Daniel Joseph Boorstin (October 1, 1914 – February 28, 2004) was an American historian at the University of Chicago who wrote on many topics in American and world history.

He was appointed the twelfth Librarian of the United States Congress in 1975 and served until 1987.He was instrumental in the creation of the Center for the Book at the Library of Congress.

Repudiating his youthful membership in the Communist Party while a Harvard undergraduate (1938–39), Boorstin became a political conservative and a prominent exponent of consensus history.

He argued in The Genius of American Politics (1953) that ideology, propaganda, and political theory are foreign to America.His writings were often linked with such historians as Richard Hofstadter, Louis Hartz and Clinton Rossiter as a proponent of the "consensus school", which emphasized the unity of the American people and downplayed class and social conflict.

Boorstin especially praised inventors and entrepreneurs as central to the American success story.