Dante Bert Joseph "Gluefingers" Lavelli (February 23, 1923 – January 20, 2009) was an American football end who played for the Cleveland Browns in the All-America Football Conference (AAFC) and National Football League (NFL) from 1946 to 1956.

Lavelli was known for his sure hands and improvisations on the field.He was also renowned for making catches in critical situations, earning the nickname "Mr.

Clutch". "Lavelli had one of the strongest pairs of hands I've ever seen," Browns coach Paul Brown once said of him. "When he went up for a pass with a defender, you could almost always count on him coming back down with the ball." Lavelli grew up in Hudson, Ohio and played football, baseball and basketball at his local high school.

After graduating, he enrolled at Ohio State University, where he played only a handful of games before he was drafted for service in the U.S.

Army during World War II.Returning in 1945 after serving in Europe, he joined the Browns in the team's first-ever season in the AAFC.

Helped by Lavelli's play, the Browns won each of the AAFC's championships before the league dissolved in 1949 and the team was absorbed by the NFL.

Cleveland continued to succeed in the NFL, winning championships in 1950, 1954 and 1955.Lavelli, who helped found the National Football League Players Association toward the end of his career, retired after the 1956 season.

After retiring from football, Lavelli held a variety of coaching and scouting jobs and was active in NFL alumni affairs.

He also ran a furniture store in Rocky River, Ohio.He was elected to the Pro Football Hall of Fame in 1975.

He died in a Cleveland hospital in 2009. 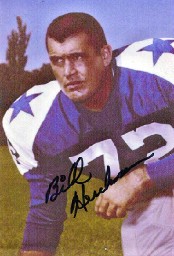