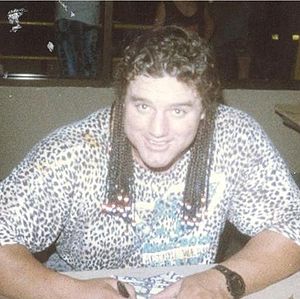 David Smith (27 November 1962 – 18 May 2002) was an English professional wrestler.Born in Golborne, Lancashire, Smith is best known for his appearances in the United States with the World Wrestling Federation under the ring names Davey Boy Smith and The British Bulldog.

He was trained by Ted Betley in Winwick, England before relocating to Calgary, Alberta, Canada to further his training under Stu Hart.

While training with Hart, Smith met Stu and Helen Hart's youngest daughter Diana, whom he married on 7 October 1984.Their son Harry is also an accomplished professional wrestler who wrestled and won tag-team gold in WWE NJPW, Pro Wrestling NOAH, Smith won titles within the WWE in three decades, from the 1980s to the 2000s.

Smith also defeated his real-life brother-in-law Bret Hart for the WWF Intercontinental Championship in the main event of SummerSlam 1992 at London's Wembley Stadium, in front of an alleged 80,355 fans.

Hart considers this to be his best match.He was the inaugural WWF European Champion and holds the records for longest single reign (206 days) and total days as champion (253); he also held the title on the sole occasion where a match for that championship headlined a pay-per-view event, at One Night Only in 1997.

Prior to finding singles success, Smith achieved stardom as one half of The British Bulldogs tag team, alongside his cousin Dynamite Kid.

Smith was inducted into the 2020 WWE Hall of Fame.